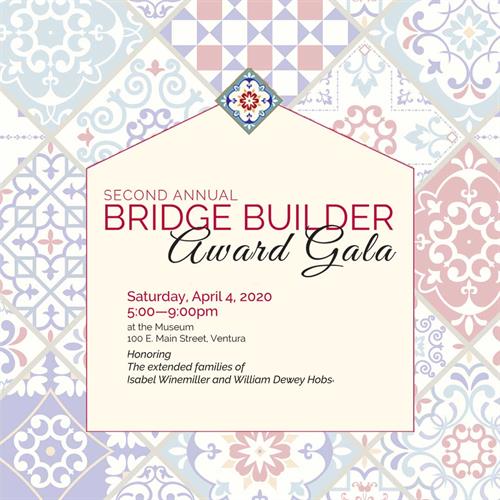 The Museum of Ventura County is privileged to honor the extended families of Isabel Winemiller and William Dewey Hobson at this year’s Bridge Builder Award Gala on Saturday, April 4, 2020 from 5—9PM. Individual tickets and patron opportunities are now available. The Hobsons arrived in Ventura County in 1854 and the vision and drive that they had and shared with their families has forever changed the way we experience our environment.

William Dewey Hobson is known as the “Father of Ventura County” when he won Ventura County’s separation from Santa Barbara County in 1872, after two unsuccessful attempts. He, his wife, and the six generations that followed them created some of our county’s most recognizable institutions, donated multiple public parks, built almost all of the original brick buildings in downtown Ventura, led the campaign to build the Museum of Ventura County in the 1970s, and much, much more.

“The sheer number of achievements of this family is awe-inspiring,” says Elena Brokaw, the Barbara Barnard Smith Executive Director for the Museum of Ventura County. “This is a family who has passed on a tradition and legacy of contribution to the community for seven generations. It is astonishing to consider how different our daily life would be if William Dewey Hobson had not led that cattle drive to Ventura in 1851.”

The Museum of Ventura County strives to inspire vibrant communities by connecting the past, present, and future. The Bridge Builder Award brings those eras together; it celebrates the accomplishments of leaders who have made significant impact on the community—those who have changed the fabric of our community, creating a new and better future.

The evening will include a cocktail reception in the Museum’s galleries and courtyard, followed by dinner and the award presentation, and finally dessert and dancing on the Museum’s Plaza with musical support by The Hollywood Stones.